​After 26 years in charge of Manchester United, winning 13 Premier League titles, and creating a dynasty that will simply never be better, nobody in the universe would've predicted that Sir Alex Ferguson's last game in football would result in a 5-5 draw with West Brom.

And if you did, I want to see the odds on that bet slip.

Sir Alex already had the 2012/13 Premier League title wrapped up, and had said goodbye to Old Trafford the previous week with a win.

But in his final game, a whirlwind 90 minutes at the Hawthorns would follow, and United would scupper an early 3-0 lead in rather unrecognisable fashion.

Goals from Shinji Kagawa and Alexander Buttner and an own-goal from Jonas Olsson, saw United in complete control inside half an hour on 19 May 2013, in what felt like a run of the mill day at the office for Fergie. 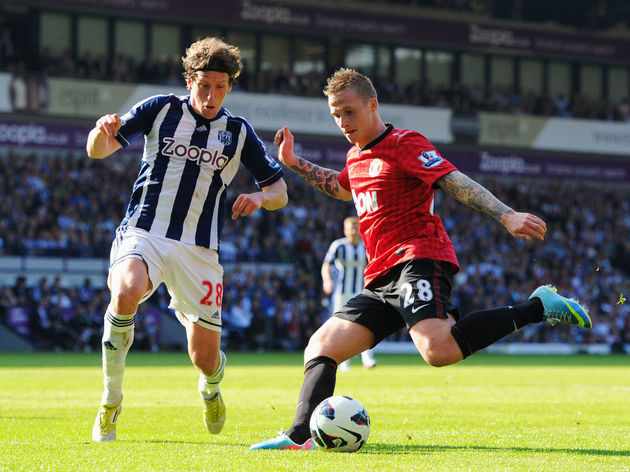 What felt like a consolation for West Brom went in just before half time thanks to James Morrison, but a young Romelu Lukaku - on loan from Chelsea - snatched a second for the Baggies just after play resumed.

United once again put the game beyond doubt, with top scorer Robin van Persie getting his 26th goal of the season, and Javier Hernandez providing what should've been the misery compiler.

Inside the final 10 minutes of play, Steve Clark's side hulked up and ran wild, bagging three goals in five minutes. Youssouf Mulumbu pulled one back, and Lukaku completed his hat-trick. What'cha gonna do, brother?

Nobody could quite believe what had just happened, and Sir Alex's side had fluffed what should've been a straightforward final victory for him. Perhaps there was still time for one final hair dryer treatment in the dressing room...

Quite simply put, West Brom were awful in the first half. United had torn them apart from the first whistle, netting two goals in 10 minutes. While their defence did a good job of keeping Van Persie quiet, the Baggies couldn't deal with United's unrelenting attack.

Support from full backs Buttner and Antonio Valencia, combined with the constant threat of Kagawa and Chicharito, West Brom crumbled under the pressure, and conceded three goals in what resembled a pre-season friendly at times for United. Jonas Olsson was particularly poor. 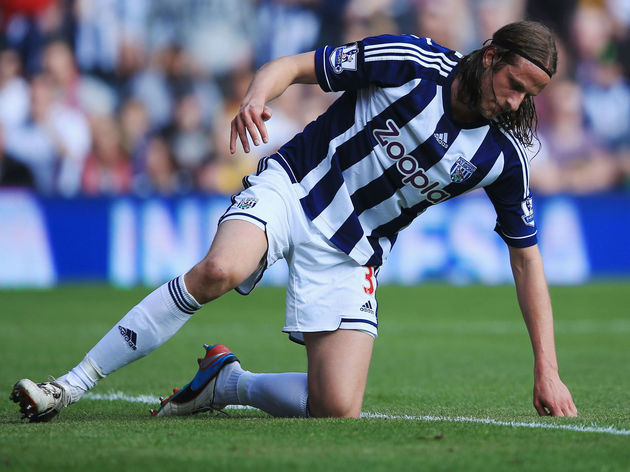 Morrison's effort just before half time felt like nothing more than a bit of stat-padding, as West Brom looked down and out. That was until Steve Clark brought Lukaku off the bench for the second half, and the Belgian completely changed the game.

Then just 19 years old, Lukaku had already made his mark on the Premier League in his loan spell in the midlands. His hat-trick against United saw him finish the 2012/13 season with 17 league goals to his name and would give his career an important kick start.

United looked sloppy in the second half, and seemed to have taken the foot off the gas. This allowed Lukaku to put West Brom back in the game with a smart, right-footed finish from outside the box that was too much for Anders Lindegaard in the United goal.

ManUtd and West Brom drew 5-5 at The Hawthorns in May 2013, in Ferguson's 1500th and final match in charge of Manchester United. Romelu Lukaku scored a hat-trick for West Brom in that game. pic.twitter.com/F1TjEGdxxH

And while the Baggies remained sloppy at the back, chances would continue to come going as United's defence also opened up. Lukaku was menacing in front of goal, and provided Clark's side with an outlet that they didn't previously have.

It's fair to say that without Lukaku, much like the rest of the season, the result would've been entirely different for West Brom. A hat-trick against the club he would eventually go on to play for says it all about Romelu Lukaku.

Fifth top scorer in the Premier League in 2012/13, only behind the likes of Van Persie, Luis Suarez, Michu (remember him?) and Christian Benteke, Lukaku announced himself on the big stage in this season, and his mature performance here was just another example of his ability.

He pulled Steve Clark's side out of the mud, in a game they deserved nothing from, and would go on to produce similar performances for Everton, and eventually Manchester United, before moving to Serie A to ply his trade with Inter Milan, where he remains currently.

In Alex Ferguson’s final game in charge of the club, @ManUtd played West Brom. The game finished 5-5 after Romelu Lukaku’s hat-trick, denying Ferguson a final victory. The greatest manager of all time? pic.twitter.com/ud5EJZUpph

Sir Alex Ferguson's last game in charge after 26 incredible years with Manchester United looked set to end in style when his side stormed to a three nil lead inside half an hour.

His young backline would eventually begin to show cracks however, as United grew complacent in the second half. It was this complacency that gave West Brom the belief to throw everything they had at United, despite how poor they were.

And while Sir Alex is undoubtedly the best manager ever to grace the game, his transfer choices in the latter stages of his career didn't prove to be his smartest. Phil Jones and Jonny Evans never quite developed into the players he thought they would, and the less said about Anderson and Tom Cleverley the better. Anders Lindegaard was also disappointing between the sticks for United. While both 'keepers conceded five goals, Ben Foster could walk away with his head held high after producing a few decent stops. Lindegaard however could've dealt with a few of West Brom's goals much better, and reaffirmed why he was never destined to succeed Edwin van der Sar in 2011, or permanently dislodge a young David de Gea for the number one spot.

Credit where it's due, though, United were electric going forward. Shinji Kagawa thrived in a more central role, Chicharito was a nightmare for defenders, and Buttner and Valencia played their roles to perfection - for a short while, at least.

The Japanese midfielder endured a difficult time at Manchester United, but through little fault of his own.

Kagawa was often shoved out wide to compensate for Wayne Rooney, who more often than not sat centrally, just behind Robin van Persie. The duo were unstoppable, and it meant that Kagawa's opportunities were limited in a red shirt, which is a shame, considering Rooney would very quickly fade out and United would need someone exactly of Kagawa's ilk to replace him.

His game against West Brom was one of few performances in a central role, and he excelled. Constantly a threat with forward passing and positive runs between defenders, he was the first goal scorer in a wild game. Another notable performance was his hat-trick against Norwich earlier that season; another snippet of what he was capable of, but still not enough for United to properly pull the trigger on him.

He quietly returned to Borussia Dortmund in 2014.

Things That Aged the Worst

Look away now, United fans. It gets very ugly from here.

David Moyes had already been announced as the heir to Sir Alex Ferguson's throne a week prior to the end of the season. It was a very bold move, but one that was sanctioned by the boss himself. Moyes was sacked 10 months into a six (yes, six) year deal with Manchester United, with his side sat in a miserable seventh place, 13 points off the Champions League. Ryan Giggs would take charge of United's final four games of the season.

Sir Alex Ferguson making sure David Moyes took charge is very similar to when Vince McMahon booked Randy Orton to drop the WWE Championship to Jinder Mahal. I'm sure he's a nice guy, but was he ever really capable of doing the job, let alone living up to the name before him? No.

Things That Aged the Best

West Brom survived another season in the Premier League despite a poor start in the 2013/14 campaign, and without the firepower of Romelu Lukaku. And the sad reality is, Lukaku was absolutely the only good thing to come out of that game. He would sign on loan for ​Everton ahead of the 13/14 season, and eventually make the move permanent as he established himself as one of the Premier League's most prolific forwards.

His 87 goals in 166 appearances for the Toffees earned him a £75m move to Manchester United in 2017, where he was mostly successful. He has since moved on once again, conquering the Serie A with Inter as they push for their first league title since 2010. For Manchester United, young Belgian Adnan Januzaj was a bright spark in a dark season the year after Sir Alex departed.

The winger made the bench against West Brom in Fergie's final game, catching his eye with some impressive performances in the reserves.

I'd like to be sat here telling you that Januzaj then took the number 11 shirt and still dons it today as United's best winger, but that would be a lie.

We'll move on before this turns into another 'Things That Aged Worst' section.

West Brom would stick with Steve Clarke ahead of the following season, but he would eventually get the sack in December 2013 after four straight defeats. Pepe Mel would come in and guide West Brom to safety, by winning just three games out of 18.

After Mel left at the end of the season, the Baggies entered somewhat of a managerial merry-go-round, and would ultimately find themselves in a mess that would cost them Premier League status.

Alan Irvine would only survive until December of the 14/15 season, before Tony Pulis arrived and steadied the ship. His managerial ability, combined with Saido Berahino's best season in football to date, guided West Brom to a 13th placed finish. Pulis enjoyed a few years in charge until it was his turn to receive the sack in 2017, and West Brom would ultimately be relegated from the Premier League into the Championship, where they remain today.

Why did West Brom not start Romelu Lukaku?

Why did Manchester United not take a punt on signing Lukaku the following season?

How did Anderson and Tom Cleverley return for another season at United?