Phil Foden on His First Man City Goal, Who He'd Love to Score Against & Talk of Leaving on Loan

Exclusive - 25 September, 2018 will always have a special date in Phil Foden's heart.

It was on that day, at the Kassam Stadium in Oxford, that the Manchester City youngster announced himself on the big stage.

Thrown into the starting lineup for the Carabao Cup third-round tie, Foden certainly impressed manager Pep Guardiola. He picked up an assist for senior teammate Riyad Mahrez, but then the 92nd minute came around.

Raheem Sterling turned towards the Oxford United box and ran. But instead of shooting, he sent the ball through to Foden, who responded with a powerful drive into the bottom-right corner to net his first senior goal.

"​A moment I'll never forget," he told 90min. "Growing up watching [City], then to actually get into the first team, playing with the likes of ​Raheem Sterling and players like that.

"I remember Raz just getting the ball and I thought 'I'm just bombing on', and it opened up for me. It's not an easy finish! "I lost my head," he confessed. "I literally can't describe it. I don't know, emotion. Scoring your first goal for a club you've dreamed of playing for, it's special. I didn't have a celebration planned."

It was a goal, and a performance, which impressed Guardiola. The City boss waxed lyrical about Foden's potential, and he continues to do to this very day.

Guardiola has taken a keen interest in Foden. In fact, it was in July 2019 that the boss described him as ​'the most talented player' he had ever worked with. Coming from a man who has also trained ​Lionel Messi, that means a lot.

"[Guardiola] was saying great things in his interviews," Foden continued. "For me to hear things like that, it gives you a lot of confidence and it makes you more hungry to play and want to work for him. 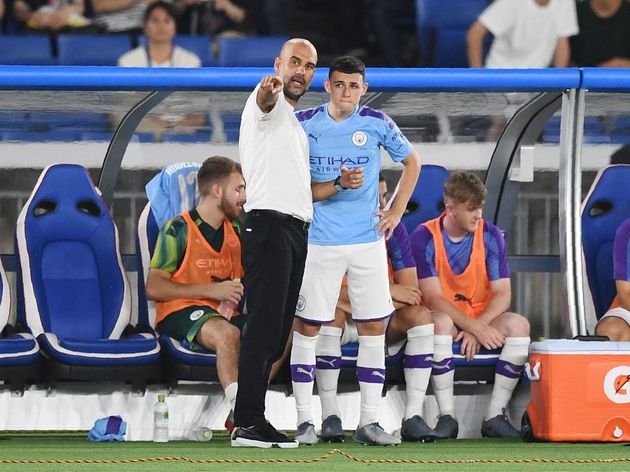 Since scoring against Oxford, Foden has added another nine goals to his tally. They have come against the likes of Dinamo Zagreb, Newport County and even ​Tottenham Hotspur, but there is one particular opponent against whom Foden is yet to score.

Asked which opponent he would love to replicate his first goal against, Foden did not hesitate: ​Manchester United. "Maybe not the same goal but, you know, hopefully. Anything will do, as long as I score."

The 19-year-old might not have too long to wait. City will travel to Old Trafford to take on the Red Devils on Sunday, 8 March, which could give Foden the chance to turn his dream into a reality.