Highlights and reaction as Millwall and Cardiff draw again

Millwall's Gary Rowett: "It sums up where we are a little bit. We compete in every game, we've created some moments, but we can't seem to find that little bit of quality that the teams above us in the league at the moment have all got. It was always going to be a difficult game against Cardiff. With two physical sides, it was hard for any team to really get a grip of the game and create open chances. 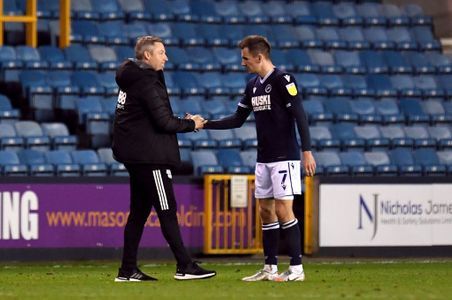 "The second-half performance wasn't as good as I would've liked, but we worked incredibly hard and just before their goal we had an opportunity to go 2-0 up that would have killed the game off. As it was, we then got into our most comfortable set-up just before the goal, we looked like we'd see the game out, then we make a poor mistake, they score and it opens the game up."

Cardiff's Neil Harris: "I can see a lot of good in what we do, but I'm wondering if that winning mentality is really there. I've seen a massive shift in winning mentality on the training pitch over the last 10 days and that has to translate to a Saturday afternoon.

"Did I see it this afternoon? I did in the second half. But it's fine looking like a good team on paper, but we need to win games of football. We have done research over the last few weeks, based on expected goals, chances created, conceded - in every stat going we are in the top six, apart from the points total. We were disappointed to be behind in a game that had nothing in it in the first half. After we made a sub and changed to a 4-2-3-1 in the second half we looked really threatening and I thought we did enough to win the game."