Cardiff appeal to go before CAS next year

Cardiff's appeal against paying the first instalment of 6 million euros (£5.3m) to Nantes for Emiliano Sala is likely to be heard next spring.

The appeal will go before the Court of Arbitration for Sport (CAS) in Lausanne, Switzerland, although the final decision is not expected before June 2020. 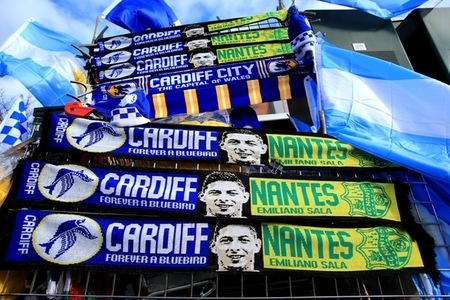 Argentine striker Sala died in January when the plane carrying him from France to his new club crashed in the English Channel.

Cardiff and Nantes have since been in dispute over fee payments, with the Welsh club saying they were not liable for the full £15m transfer fee because Sala was not officially their player when he died.

But FIFA ruled in September that Cardiff - who were in the Premier League at the time of the accident - must pay for Sala.

A CAS statement read: "The Court of Arbitration for Sport (CAS) has registered the appeal filed by Cardiff City Football Club against Football Club de Nantes in relation to the decision issued by the Bureau of the FIFA Players' Status Committee on 30 October 2019 (the Challenged Decision).

"In accordance with the Code of Sports-related Arbitration, the rules governing CAS procedures, an appeal arbitration procedure has been opened.

"The counsels for Cardiff City FC and for FC Nantes have agreed to set an ad hoc procedural calendar. A hearing is likely to be fixed in spring 2020.

"A final award is not expected before June 2020. CAS will not comment any further on the ongoing proceedings."

The plane carrying Sala and pilot David Ibbotson crashed near Guernsey on January 21, two days after the player's transfer was announced.