​The Freddie Ljungberg era got off to a slightly underwhelming beginning on Sunday as Arsenal held on to draw 2-2 with Norwich City at Carrow Road.

While Gunners fans might have been hoping that the Swede would be able to turnaround the club's fortunes almost literally overnight, the problems left over from Unai Emery's time in charge were still very much there to see.

To be fair to Freddie, he only had one training session to prep his team after Emery's dismissal on Friday, so to expect anything different might have been fanciful.

But regardless of the result, the game was a good chance to see how Arsenal will play for however long the club legend and former 'Invincible' keeps the job, so here's six things we learned from Freddie Ljungberg's first game in charge of ​Arsenal.

A Clean Slate for Everyone It's fair to say that a few eyebrows were raised when the team sheet was announced ahead of the ​Norwich game, but what it did show was that Ljungberg is intent on giving everyone a chance.

Rightly or wrongly players who had previously been ostracised under Unai Emery such as Granit Xhaka and Shkodran Mustafi were recalled.

Given that the former ​West Ham winger was part of Emery's coaching staff it might seem odd to say, but a new era has well and truly begun at Arsenal.

Mustafi Is Not the Man 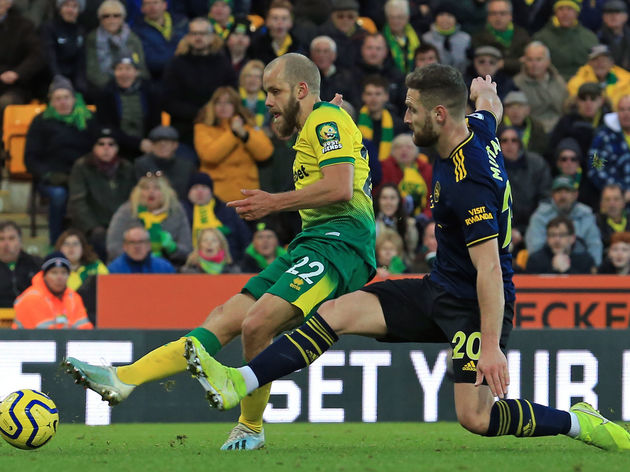 Although most Arsenal fans knew this already, it seems as though Ljungberg wanted to be absolutely certain that Shkodran Mustafi is a terrible centre back.

The German was appalling for Teemu

Changes undoubtedly need to be made at the back for the Gunners, but Mustafi is not the answer.

Young Guns Will Be Given a Chance to Fire Before joining the first team fold this season Ljungberg coached Arsenal's Under-23 ​side, many of whom have gone on to establish themselves in the first team squad this campaign.

It seems as though the youngsters are going to get more chances under Freddie, after the Swede started Joe Willock and chose to bring on Bukayo Saka and Gabriel Martinelli ahead of club-record signing Nicolas Pepe, with the Gunners needing a late goal.

With the north Londoners boasting an impressive crop of youngsters, this might not be a bad thing in the short term.

Arsenal Are Going to Attack More One of the most frustrating things about the Unai Emery reign was the Spaniard's conservatism when compared to the gung-ho approach of his predecessor Arsene Wenger.

In the former-PSG boss' final game, he brought on Lucas Torreira when the Gunners needed a goal to avoid a home defeat to Eintracht Frankfurt.

Under Ljungberg that doesn't seem to be the case, and in the early stages Arsenal played some exciting stuff with Joe Willock getting forward to support Mesut Ozil, Pierre-Emerick Aubameyang and Alexandre Lacazette. Gooners will be hoping that continues. The fact that Leno has made more saves than any other keeper in the Premier League this season shows just how poor Arsenal were defensively under Unai Emery.

Ljungberg Is Not Arsenal's Guardiola It might seem harsh to say this after just one game, but the signs were clear that Freddie might be more Solskjaer than Guardiola.

Being a club legend who coached the youth side, the parallels with Pep at ​Barcelona were there to see, but unfortunately it doesn't seem as though the Swede is quite at that level yet.

An outside appointment might be the best solution for Arsenal in the short-term, but until then the fans are fully behind their former hero.